Somalia continued its downward spiral on human and trade union rights during 2017 as the government is still waging a campaign to crush legitimate independent trade union activities, while government officials harassed, intimidated and stigmatised defenders of union and worker rights, the Federation of Somali Trade Unions (FESTU) said today in releasing its Annual Report. 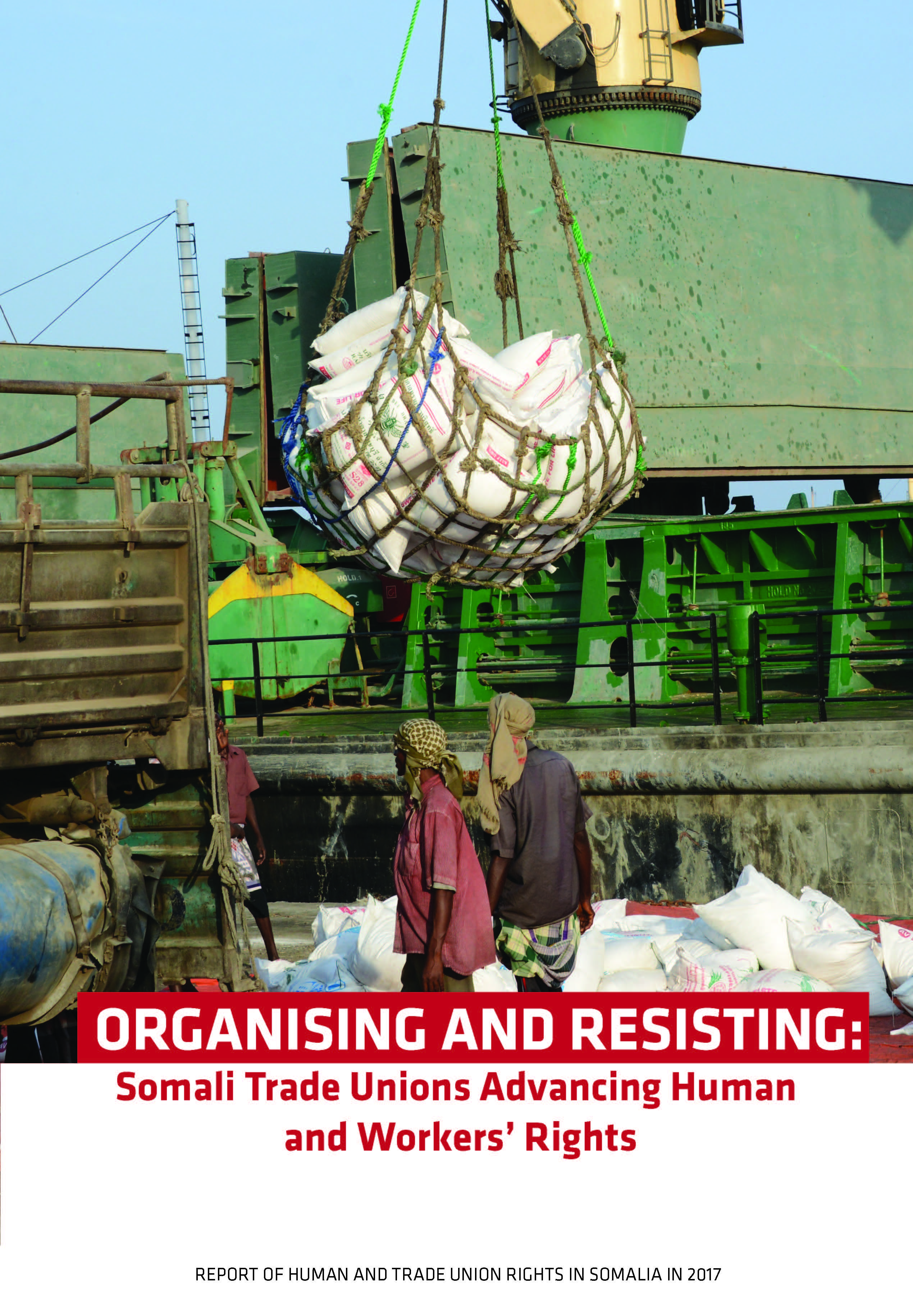 The report, titled, “Organising And Resisting: Somali Trade Unions Advancing Human and Workers’ Rights”, documents Somali authorities’ tight system of control over unions and union activists, in which trade union meetings were disrupted, union leaders were vilified and harassed, union busting has increased and governmental authorities are still pursuing the unlawful path to take over an independent trade union, says the report which adds that the Somali ministries have had their foot on the throat of independent trade unions for years.

In his preface essay, the Chair of the European Parliament’s Sub-Committee on Human Rights, Mr. Pier Antonio Panzeri, writes that the human rights situation in Somalia must be addressed urgently as it has reached highly dangerous levels, principally the relentless attacks on fundamental rights of freedoms of association, expression and peaceful assembly. These rights are inalienable but, in Somalia, they are frequently violated and, most of the times, with impunity.

“I join the many voices worldwide that have been calling for these attacks on journalists and trade unions to end forthwith. It is right and proper to ask the Somali government to uphold international law and implement the decisions of the International Labour Organisation (ILO) on freedom of association case 3113. The European Union has full responsibility in ensuring that aid to Somalia is contingent, among many things, on the full respect for ILO conventions and international human rights law. NUSOJ and FESTU have become symbols of the resistance to the repression of human rights in Somalia,” said Panzeri.

By introducing the report, the General Secretary of the African Regional Organization of International Trade Unions Confederation (ITUC-Africa), Mr Kwasi Adu-Amankwah, declared that there is a wider, deliberate, systematic and sustained general attack on the independent trade unions, the objective being to manipulate them, reduce their independence and weaken the collective voice of workers that is vital for the restoration of the rule of law and democracy. Acts of reprisals have been followed by smear campaigns orchestrated by some government officials and relayed by certain pro-government media. Unbridled acts of violations have been reinforced by indifference of some internationals who want to be favoured by the Somali government.

“FESTU and its affiliated unions are a visible component of the organised civic movement in Somalia who are boldly, tenaciously and publicly standing up and speaking out for the protection of human rights. They regularly speak truth to power, and are unafraid to confront privilege and power,” declared Adu-Amankwah.

The report, supported by the Danish Trade Unions Confederation (LO-Denmark) and three Italian trade union confederations CGIL, CISL and UIL, reveals that despite undue restrictions on the right to freedom of association and blatant attacks on Somalia’s independent trade unions, many workers in Somalia have courageously formed such unions as well as a workers’ national trade union centre. They continue to defend their trade unions in order to protest unpaid wages, precarious working conditions, staggering inflation, poor living conditions and clampdown on civil liberties.

“Ministries want to keep Somalia’s trade unions under their thumb, because they practically oppose the principle of independent trade unions that operate outside of government control, in gross contempt for Somalia’s international obligations as an ILO member, and for the labour rights of its own people” asserted Osman.

The report notes lack of accountability of culture of impunity, which the trade union movement sees not only a culture but a system of impunity. President Mohamed Farmaajo and Prime Minister Hassan Khaire inherited this deep-rooted system which is drawing opprobrium as a human rights-abusing system. Under the system, those implicated in the abuses got senior governmental appointments and those senior civil servants who are architects of the rights abuses remain in their positions where they have not faced any disciplinary action or sanctions for their repressive actions.

“Somalia’s tolerance for free and independent trade unions is approaching vanishing point, removing whatever progressive reforms the government made after President Mohamed Abdullahi Farmaajo and Prime Minister Hassan Ali came to office,” Added Osman. “This is a chance for the President of the Republic and the Prime Minister to create a powerful and positive legacy for generations to come by crushing the system of impunity”.

The report focuses on the vast number of cases where unionists and workers were denied the right to freely organise, freedom to meet as well as freedom of movement. Union members explained in the report the manoeuvres by pro-government forces to remove union’s independent leadership, and organize rushed elections, a violation of the union’s statutes.

The motives behind attacks against Somali trade unions are diverse and multifaceted. Some unionists are attacked because of their legitimate union work, others for standing up to those in power violating human rights, while the most prominent trade unionists are at risk of attack for both what they do and who they are.

May Day Message 2022: Organising for Our Rights, Dignity and Protection