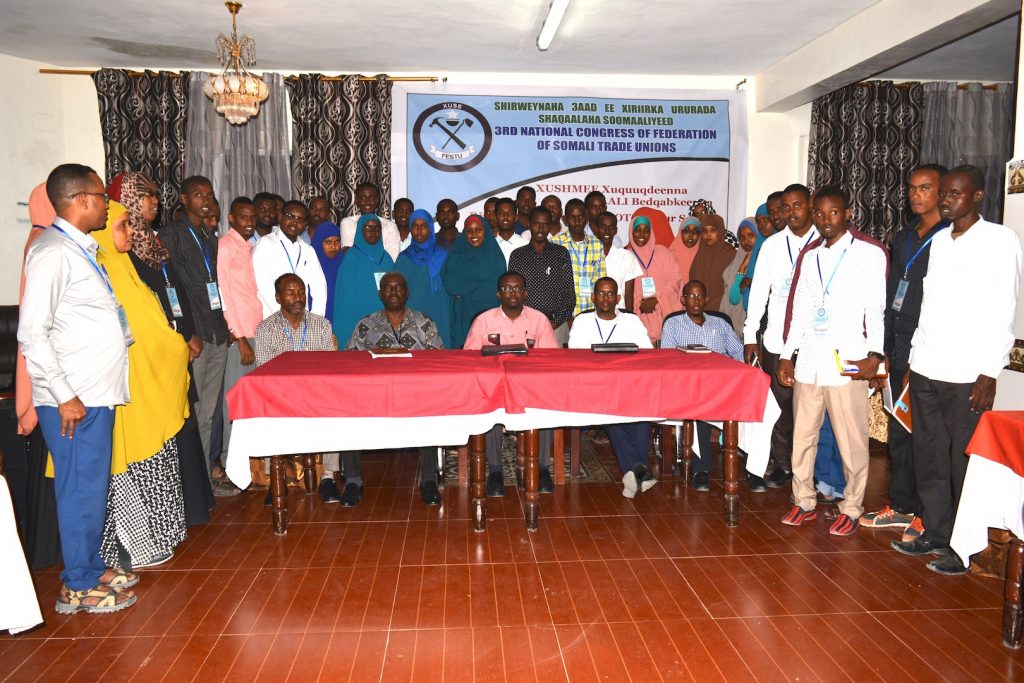 “RESPECT our Rights – PROTECT our Safety” was the slogan of the 3rd National Congress of the Federation of Somali Trade Unions (FESTU), held on 6-7 April 2016 in Mogadishu. The slogan emphasized the common elements in the diverse struggles which FESTU and its affiliates are engaged in, in all the FESTU sectors and in all the regions where the federation and its affiliates are active. 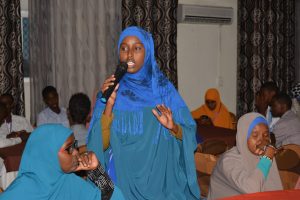 Over 70 delegates from eleven affiliated sector-unions and observers (54% men and 47% women) took part in the work of the National Congress, which in two days adopted a series of important policy decisions, resolutions, rule change and to guide the federation over the next four years. Among the statutory changes decided upon by the Congress was a decision to amend the constitution of the federation to make the congress a Quadrennial National Congress, instead of Triennial National Congress. Delegates came from Jowhar, Beledweyne, Kismayo, Baidoa, Bossasso, Galkayo, Garowe, Las Anod and Mogadishu. 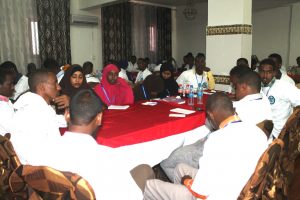 Activities and Financial Reports from the secretariat and debates from the delegates gave a solid basis for evaluating the FESTU’s work over the past three years and in setting guidelines for both the deepening of existing policies, particularly in such critical areas as organizing, recruitment, campaigning & advocacy on human & trade union rights, and occupational health and safety and the adoption of new areas for strategic work.

Among the 16 resolutions which will help determine FESTU policy and activities over the next four years were resolutions on strategic union organising, gender equality, creating platform for young workers, protection of domestic workers, peace & security situation in the country, constitutional reform and change of government, collective bargaining, climate change and impunity. 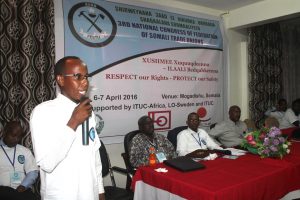 The work of the Congress was effectively enhanced by the inclusion on the Congress agenda of two panel discussions on “Better safety & better working conditions” and “trade union rights are human rights”. Each of the speakers emphasized the fundamental unity of human rights and the relevance of human rights as a core value and absolute necessity for the trade union movement to fulfil its role as the guarantor of those rights. Far from being an abstract value, the fight for human rights, including labour rights, underlies everything FESTU and its affiliated unions do and continue to struggle for.

The discussions also highlighted the imperative need to identify directions for future union membership and growth, and gave delegates and speakers the opportunity to share experiences and “best practice” for successful organizing in such areas.

FESTU invited international guests to attend and observe its congress. The General Secretary of the African Regional Organisation of the International Trade Union Confederation (ITUC-Africa), Comrade Kwasi Adu-Amankwah, arrived Mogadishu to attend the Congress. Comrade Kwasi brought comradely and fraternal greetings from ITUC-Africa and its 18 million strong African workers and the solidarity of the international trade movement. ITUC-Africa General Secretary saluted congress delegates and assured them the undivided solidarity support of international trade union movement to FESTU, its members and leadership.

Comrade Sharan Barrow, General Secretary of International Trade Union Confederation (ITUC), addressed the congress by video. “FESTU is an inspiration, you fight for freedom of association; the resilience of the attacks on your rights to simply form a union and act in the interest of your members are indeed well-known around the world. Today we stand with you in Solidarity”. Speaking to Somali government, Barrow said, “Stop attacks on the unions and stop the attacks on freedom of journalists”.

“This congress has been a watershed not only for FESTU, but the entire country. As the leading progressive force for organized workers in this country, we were faced with a challenge at the start of the Congress. That challenge was to chart the direction for working people over the next few years in our country, without government disturbing our congress. I believe that we have successfully done that. We have met the challenge and we are clearer on where we need to go from here,” said Ahmed Osman Said, re-elected President of FESTU.

FESTU President added “what we have seen over the last two days has been the best traditions of the labour movement: frank & open debate, with no attempt to stifle dissenting views; worker leadership; and practical strategic perspectives in dealing with problems”.

The re-elected General Secretary of FESTU, Omar Faruk Osman, told delegates in his closing remarks: “Congratulations to you all on such a successful Congress. We stand here today in front of you very aware of the heavy responsibility you have placed on our shoulders, but consoled by the knowledge that we will be leading a federation of members who have never hesitated to act when the leadership sounds the call to action.”

The General Secretary of FESTU told the congress delegates “you have recommitted the federation to fight tirelessly to defend workers’ constitutional and legal rights. The resolutions you have passed here at this congress lay the basis for advancing the interests and aspirations of the oppressed trade unions and exploited masses of our country for the next four years and beyond. Let us seize the strategic initiative and ensure that we use this moment to consolidate and multiply our gains as we intensify our struggle for free and independent trade unionism in Somalia”.

Click here for Declaration of 3rd National Congress of FESTU held on 6-7 April 2016 in Mogadishu, Somalia