The labour organisation, the Federation of Somali Trade Unions (FESTU), representing workers in Somalia, launched today a detailed report highlighting the state of workers’ rights and calls on the country’s newly-inaugurated President to address urgently the serious violations of key international standards for human rights by the federal government of Somalia.

This report “protection from impunity is as important as any bullet-proof vest”, which is backed by the African Regional Organisation of the International Trade Unions Confederation (ITUC-Africa) with the support of British Trades Union Congress (TUC), charts a wide range of exploitative and dangerous working practices that put Somali workers regularly at risk, ranging from cases of union members killed with impunity, to interferences with trade unions’ meetings putting their members in danger, to frequent abuses of the right to associate and peaceful assembly, to de-registration of  trade unions to make them illegal, and spurious charges to criminalise them and attempts to impose direct control. 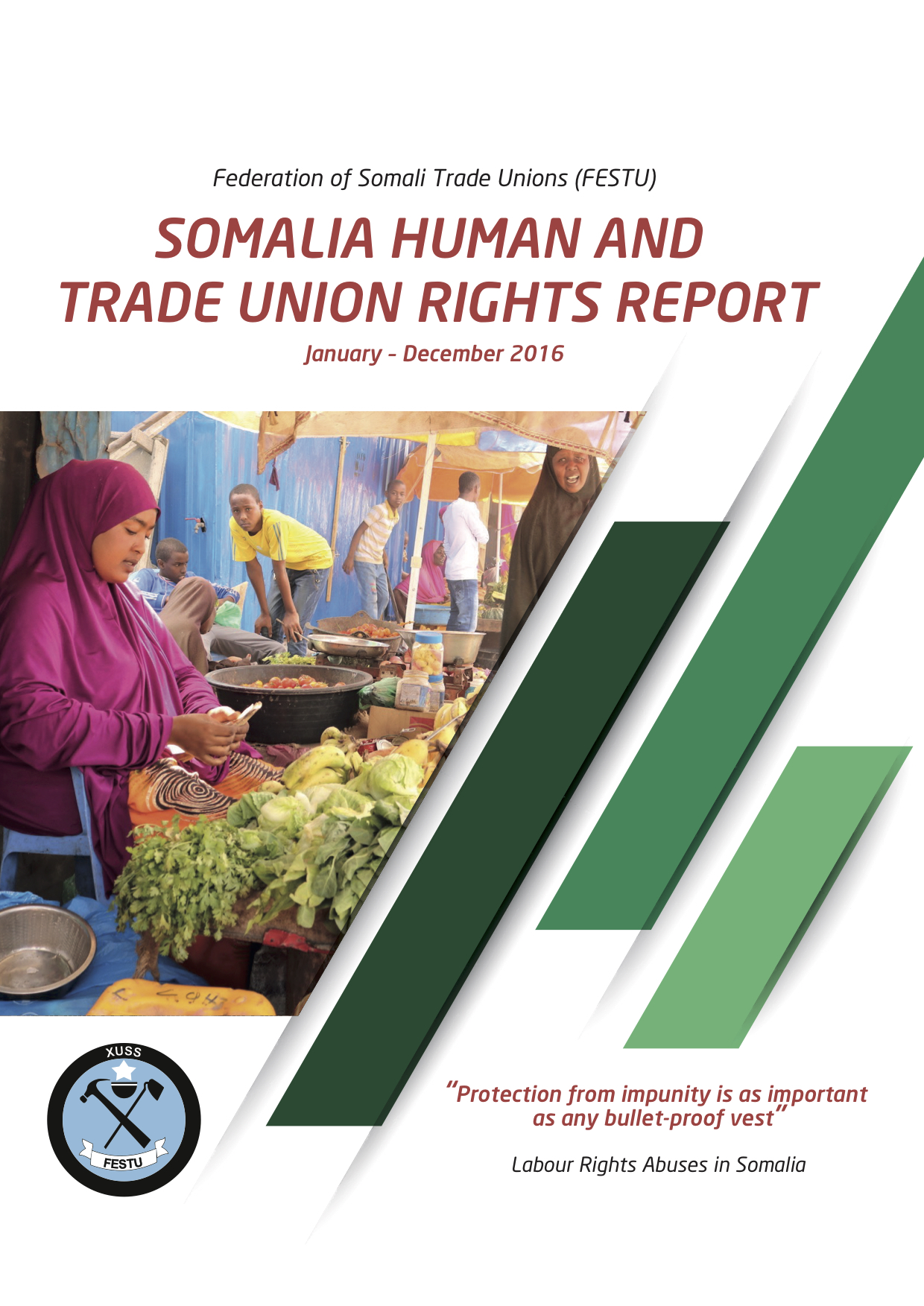 In introducing the report, Kwasi Adu-Amankwah, General Secretary of ITUC-Africa said “Free and independent trade unions, belonging to the Federation of Somali Trade Unions (FESTU), were denied the space and freedom to organise and mobilise workers. In addition, they faced concerted efforts to disorganise and undermine them. The main architects of this campaign were government agents and officials.”

The Federal Government of Somalia has legal obligations under several international and African human rights treaties, including the International Covenant on Civil and Political Rights (ICCPR), ILO Conventions and the African Charter on Human and Peoples’ Rights (ACHPR). Among the rights Somalia must uphold are the right to life and the rights to freedom of expression, association, and assembly.

“For many years’ Somali trade unions have been targeted by the Federal Government, in particular by numerous attacks on basic freedoms of expression, association and assembly in blatant contravention of national and international laws. We are now providing compelling evidence of these abuses and we expect the new administration to address them urgently,” said Omar Faruk Osman, FESTU General Secretary

The report highlights how the Federal Government of Somalia has repeatedly breached and violated the human rights of its citizens with complete impunity, particularly workers and their trade unions. It focuses in particular on how the leadership of the trade union movement has been deliberately imperilled in a concerted bid to demonise, discredit and destroy the voice of free trade unions.

“Union meetings were raided and stopped, union members were killed and wounded, and trade unions were de-registered in order to make them illegal. Fake unions were set up, as the government sponsored the seizure of independent unions and union activists were threatened,” stressed Adu-Amankwah.

In standing up against these abuses, trade unions became the first Somali civil society organisations to seek remedy from the UN human rights system and win. FESTU and its affiliated union, the National Union of Somali Journalists (NUSOJ), brought a compelling case at the International Labour Organization (ILO), with the help of the International Trade Unions Confederation (ITUC), against the Somali government for violating the right to freedom of association.

“We ask the new president Mohamed Abdullahi Mohamed to ensure that his administration  abide by and implement the various decisions made by the ILO, in particular to respect and promote freedom of association and the rights of workers to form independent labour unions, bargain collectively and conduct strikes, and to foster an environment that protects, not punishes, labour rights activists for defending human and trade union rights in Somalia, and ensure that trade union leaders and worker activists do not face reprisal for their legitimate trade union rights activities,”  added Osman.

ITUC-Africa General Secretary voiced “total admiration and respect for the courage, tenacity, consistency and sacrifice of FESTU and its members. Their resolute fight for trade union rights is appreciated continentally and internationally; and encourages the worldwide trade union movement to rally behind them and give them whole hearted support,” and insisted that “attacks and derogatory campaigns against FESTU and its members must cease. Somalia will only achieve democratic rule when it allows trade unions the space and freedom to exist and operate.”